Wedding vows can be a tricky element of your big day to pin down, as they need to have that personalized touch as well as have some kind of meaning behind them.

Because of this, a lot of people choose vows based off of their favorite popular culture franchises, such as films, books and television shows.

Pop culture and media can have a lasting impact on consumers, which is why it has become an important part of the lives of millions of people all over the world.

The major franchise that is Star Wars is one of the most impactful, and it features plenty of quotes that can easily be incorporated into a meaningful and personalized wedding vow.

With this in mind, we are going to be looking at sixteen Star Wars vows – inspired by quotes from the series- that can be used as the final touch to the perfect Star Wars themed wedding.

Padmé Amidala- the mother of Luke and Leia in the movies- has a few different quotes in the franchise that could be used for wedding vows thanks to her relationship with Luke and Leia’s father Anakin Skywalker, who goes on to become Darth Vader.

Padmé’s love for Anakin creates a wealth of quotable material that could be incorporated into a wedding vow.

This particular quote is a literal vow in the series that Padmé makes to Anakin when they are married, pledging to love him for the rest of her life.

This is a no-brainer of a wedding vow for Star Wars fans!

It is impossible to discuss Star Wars quotes without mentioning the “I Love You, I Know” exchange between Princess Leia and Han Solo!

This quote is perfect as a wedding vow for couples with a good sense of humor.

Just try not to argue too much over who will get to say “I love you” and who will say “I know”!

See also  The Best Lord Of The Rings Wedding Quotes For Speeches, Invitations And Vows

If you want to have your vows in display, then this personalized Star Wars art wedding vow could be exactly what you’re looking for.

The vow itself isn’t based off a quote from the movie, but it pretty much encapsulates the Star Wars universe.

This particular vow is just an example- as it can be personalized along with the Star Wars emblem and the names- but it’s a great vow for those engaged in the series.

This might be an unexpected vow- due to being based off of an exchange between father and son duo Luke and Anakin Skywalker- but it is a powerful choice that can be incorporated into vows due to the quote revolving around one party “saving” the other.

This is a great example of a quote that can be completely switched around in turns of context to create a meaningful wedding vow(see also: 125 Disney Quotes For Wedding Speeches, Vows, Invitations & More).

Sweet, simple and straight to the point, this quote from Anakin Skywalker is easily able to be used in a vow.

This next quote comes from Jedi Master Qui-Gon Jinn, who appears in Star Wars Episode I: The Phantom Menace.

His quote revolves around feeling rather than thinking and using your instincts, which can easily be put into the context of a wedding vow, despite initially being said in relation to Jedi training.

If your other half is a wannabe Jedi, then this quote is all the more potent!

Princess Leia becomes General Organa in the recent films and when she is reunited with her love, Han Solo, she admits that despite their arguments and fighting over the years, she hates to watch him leave.

This is a great quote for couples that have a similar, fiery dynamic to Leia and Han.

The relationship between Padmé Amidala and Anakin Skywalker is the foundation on which the prequel films are built upon, with their tragic romance being a major plot element for the entire franchise.

This quote works well with a romantic wedding, but is also to get a few laughs with the comment about love making you blind.

Another Padmé Amidala quote, this could easily be interpreted into a wedding vow as it is another romantic choice that has the speaker declaring their inability to solve the puzzle of their love, opting to instead accept how deeply in love they are with their partner.

Whilst the first Anakin Skywalker quote was short and simple, this one is somewhat longer and relates to the importance of compassion within a Jedi’s life and how he believes that despite the isolation the Jedi have to deal with in terms of relationships with others, they are still encouraged to love.

This is another quote that would be excellent to use for a couple that are particularly fond of the Jedi Order within the Star Wars Universe.

This next quote should be used only with extreme caution!

If your partner has a good sense of humor and isn’t prone to taking offense, this quote could make for a humorous moment at your wedding, thanks to Anakin’s declaration of letting go of pride and doing what is asked of you.

This quote might suggest that you are marrying your significant other thanks to duty and that you are relieving yourself of your pride to do so, hence why it is only safe to use it if you’re sure that your partner will take it well! If not, you could be looking at divorce before you are even properly married.

Fans of the dynamic duo that is Han Solo and Chewbacca are sure to get a laugh out of this vow, which declares that your partner is a somewhat less hairy Chewbacca to your Han Solo.

Again, this is another quote that is best to be used with a partner that you know has a good sense of humor and isn’t going to take offense, as some people might not take kindly to being compared to a towering furry alien!

Anakin Skywalker’s mother Shmi did not have a huge role in the Star Wars universe, but the effect that she had is not to be understated.

She even managed to get in a memorable quote during her short time on the screen.

Whilst this quote doesn’t seem to have any direct positive or negative connotations, it can easily be incorporated into wedding vows and given a positive spin in relation to the change that a new marriage brings.

See also  The Ultimate Guide To A Disney Wedding

Popular character Ahsoka Tano was first introduced as a supporting character in the animated film Star Wars: The Clone Wars back in 2008 and her popularity has only grown since, so it is no surprise that she is a character that is quotes often in the Star Wars universe.

Her short and simple quote shown here is perfect for newlyweds that are about to embark on a new chapter of their lives together.

Another quote that airs on the side of comical rather than serious, this infamous insult became legendary in the Star Wars universe and is still often quoted to this day.

Leia and Han’s relationship is built upon the love/hate dynamic, wherein both parties are frequently irritated by the other but can’t help but love one another deeply.

Leia’s frustration leads her to calling Han a “stuck up, half witted, scruffy looking nerf herder”, with Han only responding in annoyance to being called scruffy.

This is a quote that is a must to be incorporated into the vows of a Star Wars couple that enjoy poking a bit of harmless fun at one another.

Last but not least, you can’t have any Star Wars themed wedding vows without the inclusion of this infamous quote.

“May The Force Be With You” has become such a staple quote in pop culture that you’ll be hard-pressed to find someone who hasn’t at least heard of the phrase before.

Using this quote in some way is a no-brainer at a Star Wars wedding, even if it just a small nod to the phrase in your vows.

There you have sixteen different Star Wars inspired quotes that can be turned into vows for a Star Wars themed wedding!

Whether you want a humorous vow or a more serious one, hopefully you will be able to use something that we have listed here to make your wedding day extra special whilst injecting some Star Wars fun into the proceedings. 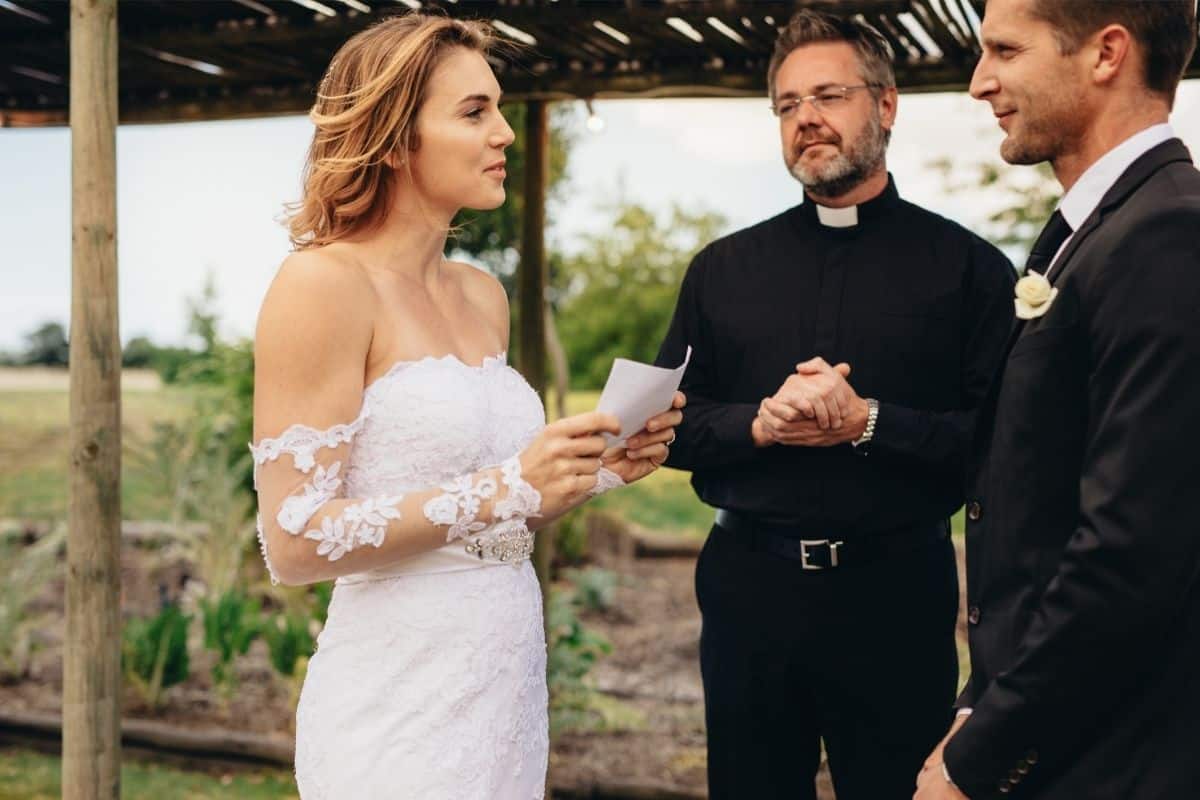 Who Reads Vows First In A Wedding Ceremony? The Bride Or Groom?